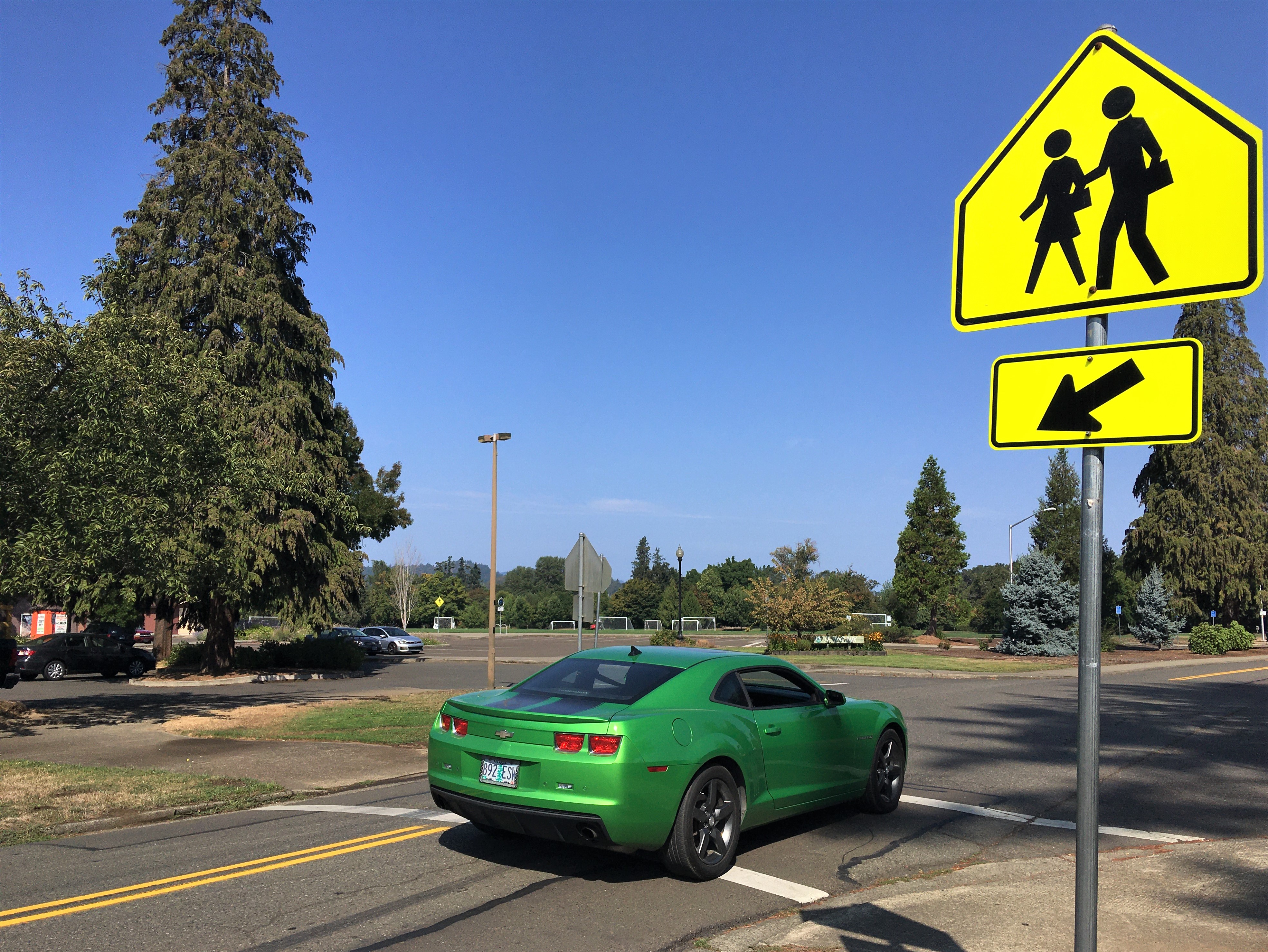 ROSEBURG, OR – As kids prepare to return to the classroom, the Roseburg Police Department encourages motorists to be extra safe when driving around schools and beyond to help protect schoolchildren as they travel to and from school.

Kids may be excited, inattentive or learning a new route. Be extra cautious when driving in school zones and residential neighborhoods, around school buses, and near playgrounds and parks. Remember that you’re sharing the road with schoolkids, who might be hard to see as they’re on foot or riding bikes, skateboards and scooters.

“We stop a lot of drivers for school zone infractions. The common theme is they don’t see the kids. Sometimes they don’t even know they went through a school zone,” said Roseburg Traffic Officer Josh Chavez. “The Roseburg Police Department’s goal is to make sure everyone is safe – which includes schoolkids and other pedestrians, as well as drivers.”

Most children who die in bus-related incidents are just 4 to 7 years old, according to the National Safety Council. Those children are tragically hit by the school bus or by a motorist illegally passing a stopped school bus.

Remember, it’s illegal in Oregon and all other states to pass a school bus that is stopped to load or unload kids. When following a school bus, keep more space between your vehicle and the bus than you would if you were following a car. That gives you more time to prepare to stop if the bus’s yellow lights begin flashing to warn motorists the bus is about to stop and children are about to enter or exit. The 10 feet of space around a bus is the most dangerous for children, according to the National Safety Council.

When the bus’s warning/safety lights flash red, stop far enough from the bus to give kids space to safely enter and exit. All lanes of traffic must stop, except in opposing lanes if the road is divided with a barrier or unpaved median strip. Drivers must remain stopped until the bus resumes driving and its red warning lights have been turned off, according to the Oregon Department of Transportation’s Oregon Driver Manual.

Pay attention to school zones, which are sections of road adjacent to schools or crosswalks that have posted neon yellow signs designating the school zone. In school speed zones, the speed limit is 20 miles per hour from the “School Speed Limit 20” sign to the “End School Zone” sign or another posted speed limit sign. Slower speeds give drivers more time to react to the sudden and unexpected actions of child pedestrians and will usually cause less injury to the child if there is a collision. A pedestrian has a nearly 50% chance of dying when struck by a car going 30 mph, according to ODOT’s “A Guide to School Area Safety.”

School speed zones vary. The signs at each location tell motorists when they must obey the reduced speed limit of 20 mph. That can include any time a yellow light on the sign is flashing, indicating children are arriving or leaving school; between 7 a.m. to 5 p.m. when school is in session; or any day at any time children are present, which includes when kids are waiting at or using a crosswalk, or a school patrol officer or crossing guard is present at a crosswalk to help children, according to the Oregon Driver Manual.

“A lot of people will say, ‘I didn’t even see the signs,’ even though they drive by them every day. It’s the driver’s responsibility to be aware of their surroundings and pay attention to all road signs and their own speed,” said Chavez. “In school zones, we don’t typically give warnings. We take the kids’ safety very seriously.”

If you’re dropping kids off at school, make sure you know the school’s drop-off and pick-up procedures for the school year. Avoid double parking because that blocks visibility for children and other drivers. Don’t load or unload children across the street from the school. Carpool if you can to help reduce the number of vehicles at school, according to the National Safety Council.

Other tips for sharing the road with young pedestrians and bicyclists:

• Always use extreme caution to avoid striking pedestrians no matter where they are or who has the right of way;

• Don’t block crosswalks when you stop at a red light or while waiting to make a turn. That can force pedestrians to go around your vehicle and into the path of moving traffic;

• Stop and yield to pedestrians crossing at crosswalks or intersections;

• Never try to scare pedestrians by honking or revving your engine, even if you believe you have the right of way;

• Bicycles can be hard to see, and children on bikes or on foot may dart out from driveways or behind parked cars. Young cyclists might also turn in front of you without looking or signaling. Be extra vigilant in school zones and residential neighborhoods;

• Don’t drive in a bike lane; however, you may cross a bike lane when turning;

• Yield to bikes in a bike lane or on a sidewalk before you turn across the lane or sidewalk;

• When passing a bicyclist, move slowly and leave at least 3 feet between your car and the cyclist;

• When turning left and a cyclist is approaching from the opposite direction, wait for the cyclist to pass you;

• When turning right and a cyclist is approaching you from behind on the right, wait for the rider to go through the intersection;

• Check side mirrors before opening your vehicle door;

• Avoid distractions. It’s illegal and dangerous to yourself and others to use a handheld mobile phone or tablet while driving in Oregon.