Roseburg has been a dwelling place since time beyond memory, a village of native peoples residing in the pleasant groves on the eastern shore of the South Umpqua River when the first white men visited the region. The location was an idyllic one, with abundant fuel, native fruit, pure water and a pleasing climate. The river and its tributary, Deer Creek, teamed with salmon and trout and the hills provided a rich hunting ground for deer and other game animals and birds. 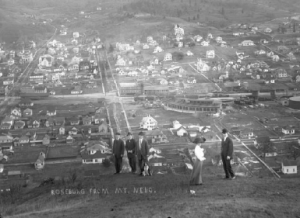 Into this natural paradise came the fur brigades of the Hudson’s Bay Company, trapping and trading with the natives. Pack trains of the trappers, loaded with bales of the prime fur of beaver and otter, followed the Indian trails as they headed north to Fort Vancouver, headquarters for the great fur company.

With the influx of settlers into Willamette Valley in the 1840’s, Americans began to explore the Umpqua Region. Lieutenant George F. Emmons and past Midshipman Henry Eld led a division of the Wilkes United States Exploring Expedition over the present site of Roseburg in 1841, on their journey from the Columbia River to San Francisco Bay. A squatter named Musgrove is reported to have been the first white settler on the present town-site. His rights were acquired by the brothers, J.T. and L.C. Raimey, who in the fall of 1851 conveyed their rights to a newly arrived settler, Aaron Rose. Rose and his family settled on the land and their home became a tavern and stopping place for the many travelers who followed the old Oregon-California Trail. Long pack trains from Scottsburg, loaded with supplies for the rich mines of Southern Oregon and Northern California, passed this way, as did the northbound wagon trains of settlers who came in over the “Southern Route,” following the Scott-Applegate Trail.

Rose platted a town, first known as Deer Creek, which later became known as Roseburg. William T. Perry arrived in 1851 and established a water-powered gristmill on Deer Creek. Merchants and tradesmen began to arrive and Rose’s pleasant location formed the nucleus of a growing trade center. A post office was established in the Fall of 1852 and a school soon followed, as families with children began to move into the area. In 1854, an election resulted in the county seat of Douglas County being moved from Winchester to Roseburg; this and the transfer of the Land Office from Winchester assured Roseburg’s growth as the county’s leading city. 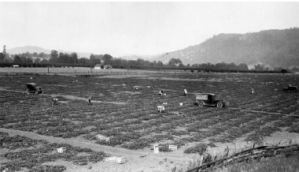 The rich farmlands surrounding the location drew increasing numbers of settlers and the timbered hills rang with the music of axe and saw as homes were hewed out of the stands of virgin fir timber. Ox teams drew breaking plows through the fertile soil and bumper crops of grain were harvested. Herds of cattle roamed the grass-covered hills, fattening on the abundant pasturage before being trail-driven to distant markets. The ranchers imported sheep and hogs, blooded horses and cattle and Roseburg grew as the trading center for an agricultural empire.

Roseburg became a terminal on the stagecoach line between Portland and Sacramento and in 1864 was linked with the outside world by telegraph. Captain John Mullan, passing through in 1862, remarked that Roseburg was a “gem of a village,” situated in a beautiful valley in a high state of cultivation and that the town boasted white frame cottages along streets neatly laid out. The Pioneer store, established by Lewis L. Bradbury in 1853, was the forerunner of many mercantile establishments; anvils rang in the town’s blacksmith shops and industry flourished. In 1870 an attempt was made to establish steamboat service on the Umpqua in an effort to link Roseburg with the busy coastal seaport of Gardiner. A sternwheeler named the “Swan” ascended the Umpqua in 1870 as far as Roseburg and although government funds were acquired to improve the channel between Scottsburg and Roseburg, this was the only voyage of a steamboat on this section of the river. 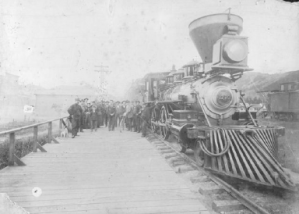 In 1872 the whistle of a woodburning locomotive heralded the arrival of the first train on the Oregon and California Railroad. This direct rail connection with Portland started a fresh wave of economic growth and development for Roseburg. The town was the terminus of the rail line until 1884 when the southern extension of the road was completed between Roseburg and Ashland. In 1887 the line over the Siskiyous was finished, placing Roseburg on the only through rail route between Oregon and California.  The railroad established shops and a roundhouse in Roseburg, creating new jobs and booming the economy of the city.

Local industry and agriculture have experienced a wide variety of operations. Following the pioneer years of grain and cattle ranching, the progressive farmers successfully produced hops, prunes, broccoli, melons, grapes and numerous other specialty crops. The rich soil and mild climate earned the title of Garden Valley for the alluvial bottomlands west of the city and the county became unofficially known as “The Banana Belt.”

Gold mines disgorged their wealth and the county’s deposits of other minerals helped swell the coffers of citizens and businesses. Cinnabar mines produced mercury, silver and copper deposits were located and in the 1890’s an effort was made to mine the vast deposits of nickel ore in the adjacent Riddle area, south of Roseburg. Improved smelting methods resulted in operation of the Hanna Company, a pioneer mine which was the sole producing nickel mine in the United States. Deposits of local marble were once quarried on a small scale, and cement rock was shipped by carloads from workings in the Glengary region southeast of Roseburg. A woolen mill on the South Umpqua once promised a rosy industrial operation for the City, but this mill was destroyed in the great flood of 1890. The county still leads Oregon in the production of sheep per capita.

Other industries such as brickyards, breweries, canning plants, woodworking, furniture making and electronics have flourished and declined over the years.

The greatest wealth in the area was probably the forests and the rich harvest of timber they have produced. Pioneer saw mills cut lumber for early-day construction and lumber was exported from the mouth of the Umpqua, first by sailing vessels and later by steam schooners. After the coming of the railroad, lumber was exported by rail, but still there were vast reserves of virgin timber untouched by the logger until the start of World War II. In 1939 there were only 37 sawmills operating in the county, but by 1947 this number increased to 278, most of them engaged in cutting Douglas Fir lumber. The harvesting and processing of this “green gold” earned Roseburg the title of “Timber Capitol of the Nation.” 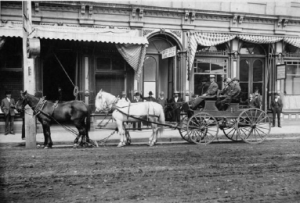 The Roseburg area continues to offer many of the attractions which drew the pioneer settler, combined with the modern conveniences and amenities.  Fish and game abound, now sought for sport more than necessity; deer are numerous even though the hide hunters of the 1880-1900 period slaughtered as many as 30,000 deer annually, just for their hides. Campgrounds along the beaches and streams served pioneer settlers and prove equally attractive to the families of today. To such pioneer activities as swimming, boating and picnicking have been added skiing, water skiing, diving, hiking and many other outdoor recreations.

Our appreciation to the late Geoge Abdill, Director of the Douglas County Museum for the above history.

Link to Douglas County Museum of Natural and Cultural History