Sister City relationships are formed to further international understanding at all levels of the community and to improve the present and future world by increasing knowledge and appreciation of citizens in all countries.  The City of Roseburg is honored to have such a relationship with two cities.  Both relationships are coordinated through the volunteer members of "Roseburg Sister Cities, Inc,".

Our relationship with Shobu Town Saitama, Japan began as a student/teacher exchange program established by the late Harold Winfield, Joseph Lane Middle School instructor.  After seven years of student exchanges, a Sister City relationship was formalized in 1993 and adult exchanges implemented.  In 2010, Shobu combined with several other cities to create the new city of Kuki-Shi.

The City has been blessed with beautiful gifts from Japan which are on display throughout City Hall - the most notable is the "A Mother and Her Colt" bronze status located at the corner of Jackson Street and Douglas Avenue. Artist Mr. Toshio Ogino described his inspiration for the artwork in this manner: "In the past the horse was needed by man to do a lot of his work.  There became a unique bond between horse and man.  I consider the horse to be a noble beast.  The mare and colt depict a strong bond, such as the horse and man had.  The love between the mare and colt represents the love that is spawned by cultural exchange.  The horse and humans have been intertwined throughout history.  The bonding of the mare and colt is the same sort of bonding that should be obtained by the family, by friends, by neighborhood and eventually by the world.  It also represents the bonding of the two cities of Shobu and Roseburg." 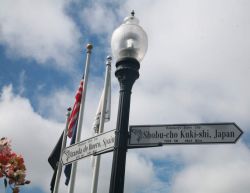 Our relationship with Aranda De Duero Spain was formed in January 2007 at the urging of winemaker Dr. Earl Jones who recognized the similarities between the Umpqua Valley and Aranda, a small winegrowing town in the Burgos region of Spain Europe. With a population of approximately 33,000, the town is unique for having wine cellars that interconnect below the streets of the town center. "Lechazo" is a local speciality - a roast baby lamb usually served with a basic salad and lots of "torta" bread for dipping in the meat juices.

In 2010 we were honored with a vistation from two representatives of Aranda, Lenoisa Ulla Laita, Aranda City Councilor in charge of Sister City Relations and Araceli Gala, Senior Secretary for the City and Sister City program liaison.  In anticipation of the visit, the Roseburg and Aranda flags were flown in front of City Hall and a directional sign pointing the way to Aranda and Kuki-Shi was erected at the front entrance.

Below are videos provided by Aranda de Duero.  Please note most are in their native language while some will have English subtitles.