In 1910, the first recorded history of flying activities in Roseburg was when a balloonist offered townspeople rides as part of the Annual Strawberry Celebration.  By 1927 Roseburg began to think about a permanent location for an airfield.  Up to that point, flying had been done from fields and the fairgrounds.  Also in that year several army fighter aircraft were forced to land south of Roseburg while enroute from Seattle's Boeing Field to Los Angeles, emphasizing the need for a permanent solution.

So in 1928 the Umpqua Post of the American Legion was successful in a $25,000 bond issue for 90 acre land purchase, hangar construction, drainage and runway.  Out of 1201 votes cast, the issue was 807 yes to 394 no.  The News Review stated:  "Every town needs an energetic organization such as the Legion to carry on and keep its people enthusiastic.  Roseburg is certainly grateful to these 'boys' for hitting the ball and taking the kinds out of those pessimistically inclined.  Let the good go on!"

At this point in time, the Interstate Commerce Commission was planning to install a system of lights and beacons along the west coast airway, and if Roseburg's airport was ready, the lighting fixtures, beacons, etc., would be installed to make the facility suitable for night flying.

The City completed Roseburg Aviation Park which supported a 3,800 foot runway.  At that time, the facility was considered one of the finest in the state.  Just one year before, Portland's Swan Island facility was dedicated and they were in the process of planting grass off the base of their runway.

Jump to 1938 and Airmail service was initiated from Roseburg.  The next year Ernest Sink formed the Umpqua Flying Club. 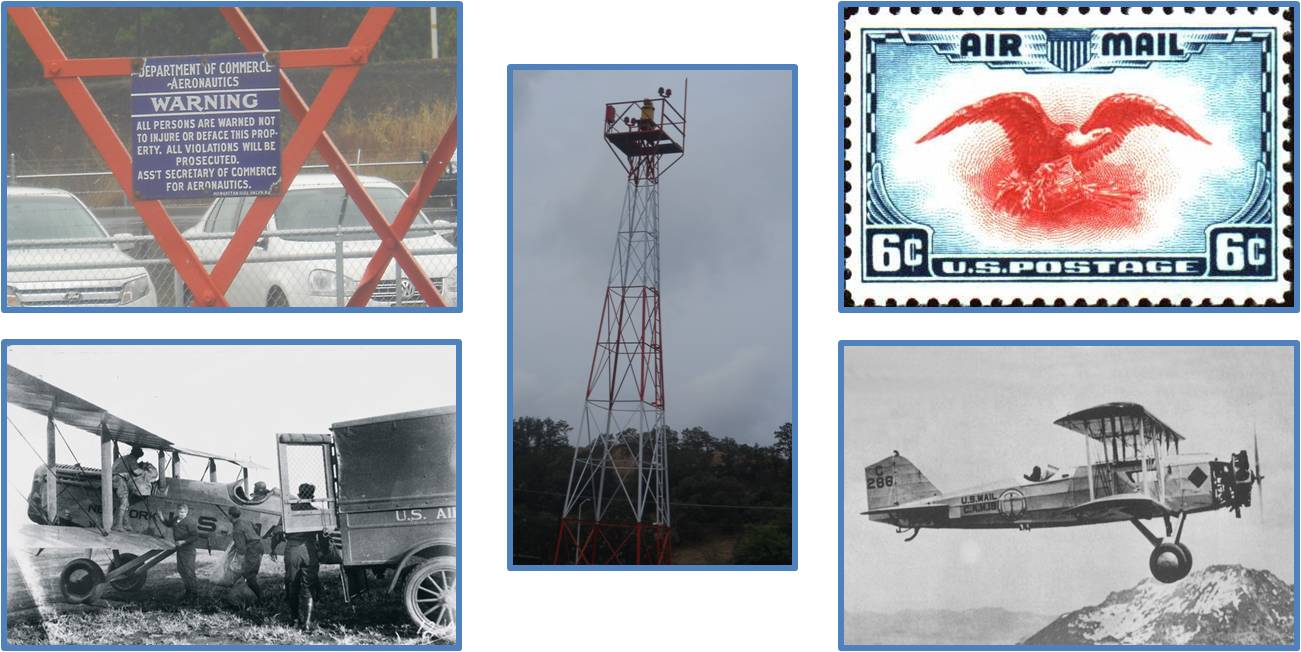 In 1941, Pearl Harbor was attacked and threats to the west coast caused removal of all civil aircraft from the coastal area and all planes of over 100 horsepower were commandeered for coast patrol.  However, improvements continued.  The Roseburg runway was graveled to accommodate landing and takeoff during more inclement weather conditions and to allow for different types of aircraft.  The original airport services were located on the east side of the runway.  Fixed Based Operator services were provided as early as 1945 by George Felt. They included ground and flight training; fuel, oil, and maintenance services; contract flying; and agricultural operations.  In 1948 the FBO also provided flight training for veterans on the G.I. Bill.  Other FBO operators over these earlier years included Shirley Wardle in 1951, Dick Beverly in 1956, and Robert C. Goode in 1960 who operated Roseburg Skyways for 24 years.

Over subsequent years, expansion of the airport continued with construction of additional ramps, a taxiway, gas tanks and pumps, floodlights, hangers, and access. In the early ‘60s, taxiways and 39 aircraft tie-downs were constructed along with other improvements and obstruction lighting.  By 1974, an aerial photo showed 69 single engine aircraft on the ramp; 4 helicopters; and 21 hangar spaces; totaling 80-90 aircraft based at the airport.  In 1976, 10 new hangers were constructed.  The 70s were a busy time! 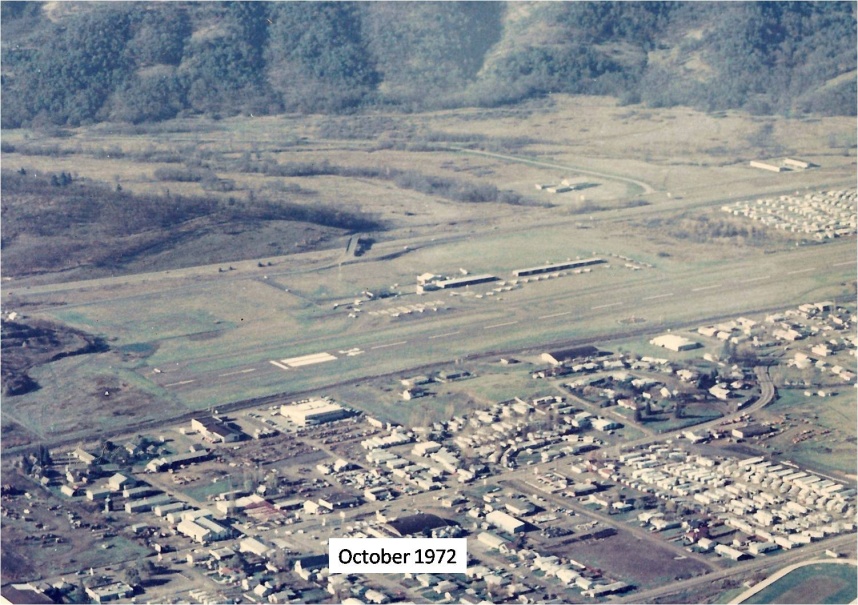 Passenger service out of the Roseburg Airport was initiated in 1951 with West Coast Airlines and cost all of $11.65 one way to Portland in 1953. In 1959 as a result of continued scheduled passenger service a terminal building was constructed with donations and volunteer labor. Other airport facilities were also reconfigured to support passenger service. The terminal was initially called the Air West Terminal, but was later dubbed Roseburg Aviation. According to records, passenger service was provided in Roseburg from 1951 continuously through 1969. Several folks currently associated with the airport remember their very first flight out of the Roseburg Airport during this time. During this era, both West Coast Airlines and Hughes Airwest provided scheduled passenger service. Passenger carrying peaked in 1953 at just over 5,100 boardings. Below is the West Coast Empire Airlines brochure from 1953. 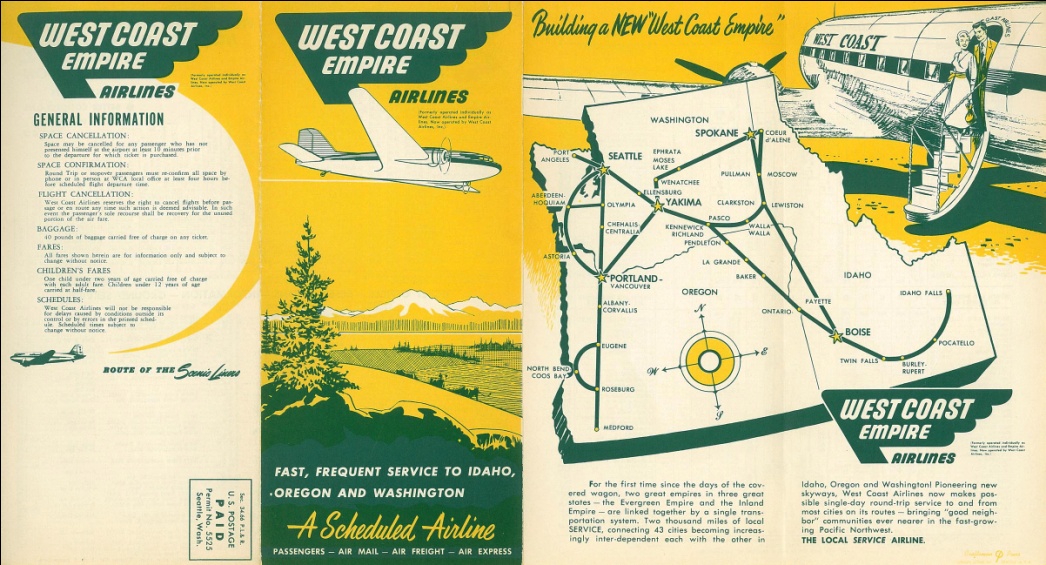 While service during this period was continuous, the frequency and reliability varied, thus affecting passenger boardings.  Boardings reached a low of 344 in 1965.  Shortly thereafter, regular service changed to scheduled air taxi service.  Some type of passenger service continued for many years, but never regained the popularity it had in the early 50’s.

In 1978 the Airline Deregulation Act was signed by President Carter which eventually led to the end of passenger service from Roseburg due to airline route prioritization and profitability. By 1984 Roseburg was no longer a candidate for third level passenger service.

Also in the 70’s, several studies pertinent to the airport location were conducted and predicted the end of the airport within 10-15 years.  However in 1979, the recommendation was to leave the airport in its current location as a general aviation airport.  Expansion in the early 1980s was primarily in adjacent associated areas for industrial park development.  However one entrepreneur came in with plans for multiple developments on the airport including a new terminal and various other facilities and renamed Roseburg Skyways Western Wings.  During this same time the FAA also funded some critical maintenance and upgrade projects for repaving and obstruction removal.

In the 90’s another location study was performed and it was ultimately determined that the Airport should stay in its current location.  Activities continued including General Aviation and Part 135 Operations.  In 1992 the airport was renamed Roseburg Regional Airport to reflect its importance in Southern Oregon aviation.  Then in 1998 per City Council Ordinance the Airport name was amended to also be known at the “General Marion Carl Memorial Airfield” after a decorated WWII Marine Corps aviator.

From 2000 to the present, the City of Roseburg has aggressively pursued funding to continue to maintain and upgrade the airport’s facilities, services and infrastructure, most recently with the completion of a runway extension and relocation of the taxiway.  The Airport remains dedicated to supporting access to the public through general aviation and commercial operations. 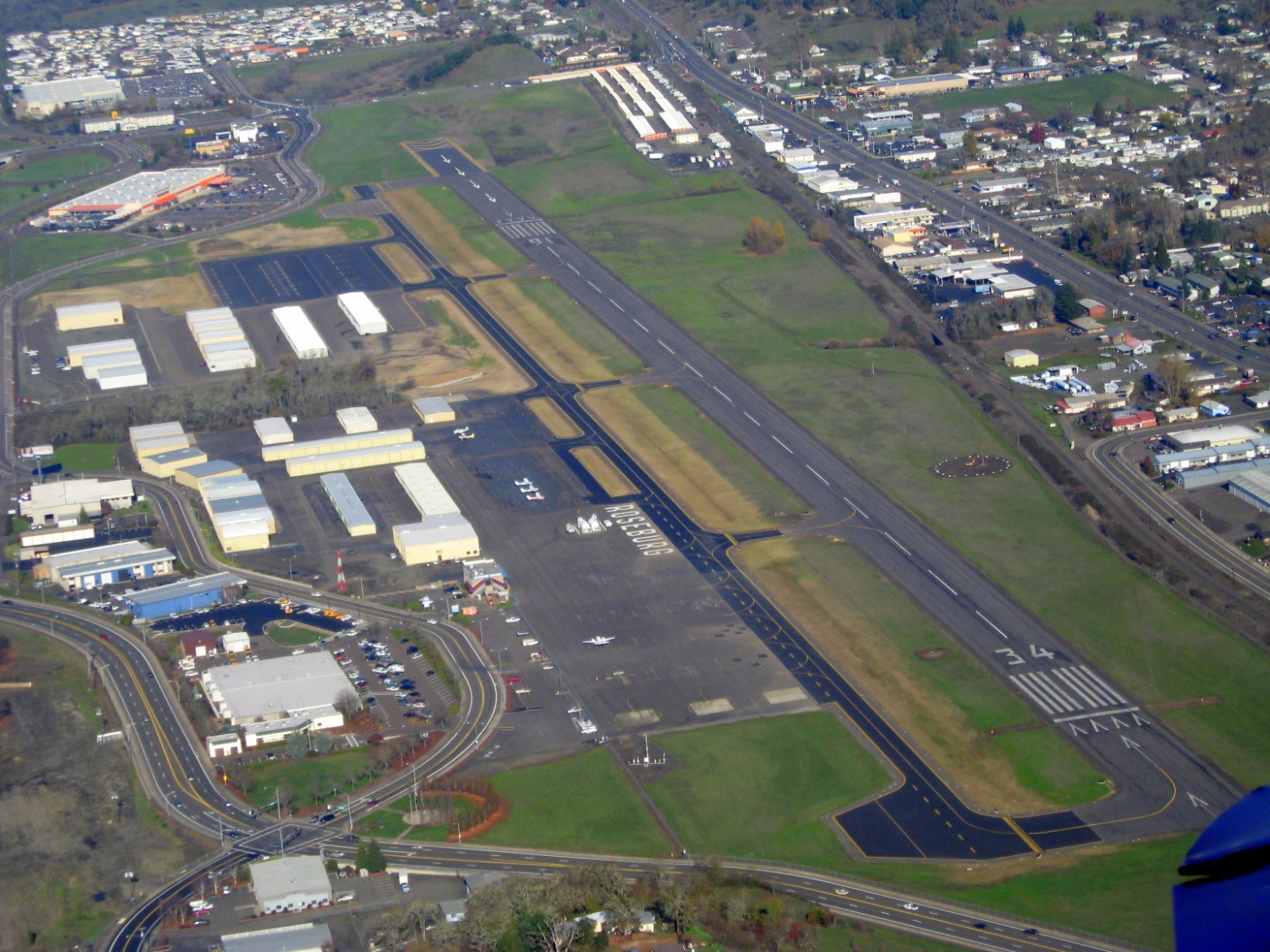